Home › Books and Blades › My Treasures

I’ve been an enthusiast of the sword ever since the mid 90’s and a lover of books since I was a child.  And further pursued these two contradictions in my adulthood. Even when life pitched  unrelenting obstacles into my otherwise smooth path, I always made room for a new book or a new  sword. Strands in Manhattan gave me more bang for my bucks, but my pockets only allowed for the cheap knock-offs as far as swords go.

My first was the cheap Marto  Toledo  Tizona and Colada. I say cheap because at the time they cost only a hundred dollars and weren’t the real deal. They were more show pieces than anything else. heavy, shiny things no true swordsman would think of taking into the chaos of steel and blood.  I had a fascination for the long edged weapons, but not the understanding of it complexity.

Of the sum of its parts. The need for balance and flexibility.  Since then I’ve researched and purchased, acquiring two beautiful pieces from West Africa (a 19th cent. Takouba and a 19th cent. Kaskara),  two reconstructions ( manufactured blades created with the same specs as functional swords, live blades, great balance, and practical hilt fittings.),and of course the cheaper less valued reconstructions, which will soon be sold off on eBay. Or given away to anyone who wants them. And before I forget an actual fencing foil from the time I took up modern fencing back in the days.

My library is modest, but I still have some valued tomes which are worthy of mention. The Biography of Charles De Gaulle  Collector’s Edition was found amongst some old books in the attic of my parents new house.  The Illiad, The Three Musketeers, and  Edgar Allen Poe: Tales of Mystery and Imagination are all my Franklin Library  collectables. I remember them being sold by a street vendor in the Soho and couldn’t believe how lucky I was to happen upon them. 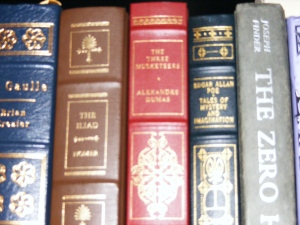 I ran to the bank, withdrew what I had, and bought them on the spot. Their price was nothing in value compared to their true worth.

And then there’s Fritz Leiber’s White Wolf Publications of his Lankhmar heroes Fafhrd and the Grey Mouser. This was my introduction to the Sword and Sorcery prose of Fritz Leiber and I have no regrets. Mike Mignola provided Cover art for all four volumes, true masterpieces in their own right. I devoured them as soon as they become available.

In a nutshell books and blades were my secret hideaways. When the politics and cruel intentions of the American Dream became tiresome, my fingers crept along the pages of wonder. Or I would hold a blade in a stern grip and get lost in that feeling of the familiar,… the surreal, …the spirit of the indomitable. It never failed to recharge my batteries for the world which looked to devour me.